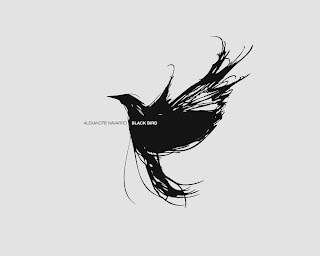 Black Bird is essentially a live guitar session split into three parts. I love this project because of it's originality as well as the sound. There is little to distinguish the three parts which are called Part.1 (Envol) / Part.2 (Survol) / Part.3 (Resolution).

The music tells a story as you can guess from the titles. This kind of atmosphere that is generated and the feeling it created inside me is very hard to describe with words. The best I can come up right now is that it made me think of the start to the movie 'Paris, Texas' - at the beginning when the guy is walking on his own through the desert. If you don't know what I mean find it and watch it. It's a great film.
I hope this comment does not offend Mr. Navarro it's just that I really believe this piece of music was made for film and I hope one day to be able to use it or watch the film created that does (use it). It's difficult to create a work of such pureness and Navarro should be commended for his dedication to the art. The only drawback for me was that it was all over too quickly and I was left like an unsatiated vampire wanting more, more, more!
5/5
CTZN V41N

Song Of The Moment