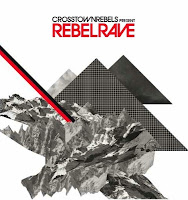 Firstly, before reading this I strongly recommend that you check out rebelrave.tv The site houses a series of films by the Rebel Crew documenting their antics on tour and delving into their musical souls. OK complete? good so now you have the background information on why this project was initially conceptualised. The final release will be a three disc package. I was sent a promo CD which is disc 3 of the final release - a collation of Rebel material mixed by Clive Henry and it is smoking hot people! I wish I had been sent the finished version of this as the tracklisting for the first 2 discs is immense featuring the likes of Minilogue, Seth Troxler, Luke Solomon, Soul Clap, Laurent Garnier, Peace Division and Rob Mello.
Henry's mix is tight and I mean tight. He cuts up oodles of different tracks and blends them all into one big melting pot of dance music nirvana, building from an mellowed out deep disco base through to a slightly tougher tripped out vibe towards the end with bangers like the awesome Exercise One remix of Shackletons 'Next To Nothing'. This is a must have package.
4/5
CTZN V41N

Song Of The Moment